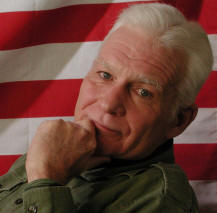 Captain Dale A. Dye, USMC (Ret) came to Hollywood with a vision. Unlike most who make the trip, he wasn’t aiming for money, power, or celebrity. He had a single mission in mind…to change how American civilians view the common grunt. Having been around infantryman all his life and having been one himself, he knew that the majority was intelligent, creative, and full of heart…and the image of the dumb cannon-fodder blindly following orders not only wasn’t true…but was a grave disservice to those brave service people who had risked and often gave their lives so that our nation could survive and prosper. So he looked for the best medium available to reach the hearts and minds of the public, and chose the film and television industry to spread his message.

Although the film industry is filled with large egos and rugged individualists, it is ironically the most collaborative of media. It is virtually impossible to make a film alone. Captain Dye needed staff to forward his mission, and I have the honor of being one of his amazing crew. And it is within the cadre of his company, Warriors, Inc., where his leadership is first apparent. Each of us is a part of the company because we choose to be. We understand that through his actions, his passion, and his integrity, that each experience we have with him makes us more competent, and in fact makes us better people at whatever it is we choose to do in the future. He believes in us and allows us to see what we can become. He asks only the best of us at all times, and because of his inspiration, we excel again and again.

During each film, we train and motivate a core of actors and specialty background, where his leadership skills are once again put to the test. In an intense training evolution, usually two to three weeks, we eat, sleep (sometimes) and train. By the end of this period, he has shown each trainee the extent of their potential and how to evoke it when needed. During the filming, when big bucks are on the line and time is scarce, he now has a team that will immediately and appropriately respond to his commands, not because they feel they must, but because he is the one who asked. And they are filled with pride that they have the ability to do so. These die-hard individuals have learned that taking care of others, and keeping an eye on the mission, are far more important—and more satisfying—than their own desires.

But his leadership skills go even farther. Once filming, he must also lead a vastly diverse collection of individuals, such as electricians, artists, wardrobe designers, lighting technicians, cinematographers, and more, infecting each person with his vision and that of the director. He often must ask them to work harder than they might feel is necessary…and they do. Once they see how the world could look through the eyes of the Captain, most are reluctant to return to a world motivated only by a paycheck. The energy, creativity, and initiative he inspires is a wonder to behold.

Platoon. Band of Brothers. Forrest Gump. Saving Private Ryan. He has done precisely what he set out to do: inspire us to see professional men at arms as the heroes they are, not through false glory or propaganda, but through demonstrating the truth of their honest struggles on our behalf. I am honored to know him and to have the privilege of working with him.

Military service: includes thirteen years as an enlisted Marine; was in Vietnam in 1965 and from 1967 through 1970 surviving 31 major combat operations

Current personal passion: It is what it has always been: I’m concerned that our nation has a habit of forgetting the service and selfless sacrifice of our men and women in uniform. They are enormously underappreciated, and I continue to work to fix that in the popular media. Our service people have been stereotyped since the end of the draft in the 50’s and 60’s, and military service has become an unknown commodity. Vietnam isn’t the way it always is. We are missing a great American common denominator in compulsory military service. It gave us a much broader perspective on the scope of common people; now, it is all about me, me, me. It is a hole in our national character, and I’m trying to fix it.

Most admired leader: I have great admiration for many past and present leaders of our nation. My background tends to make them military people. Omar Bradley, George Patton, and Alexander Vandegrift are the contemporary people that come to mind. Leaders with the most influence on my life are the junior enlisted and officer leaders I had in combat in Vietnam. These are people that brought me up and taught me. They are anonymous, underappreciated people, but they certainly were known by me and the other young women and men they touched. The people who influenced me more were professional marine leaders, officers and enlisted.  They were not careerists who are self serving people out there for themselves and their own ambitions. The types of leaders I am talking about are selfless people who see an honest need for service and sacrifice and are willing to give it without recognition, admiration, or adulation.

Favorite books: I read Julius Caesar's Gallic Wars in both Latin and English. I like Heller’s Catch 22 to remind me you need a sense of humor. Michael Herr's Dispatches is good. I like the works of Hunter Thompson. I’m a fan of great writing and incisive observation and these books have that.

Favorite quotation: "The best leaders are the best actors." -General Patton     What does this mean?  What Patton means is that leadership takes many forms; in order to be effective, it must be genuine. Simply put, a good leader has to be fully adaptable and believable. Much of what you do as an inspirational leader is a performance. A leader must be flexible and conscious of what performance is required. The leader must be adaptable to fit in any niche in which leadership is required. The leadership given must be relating to the individual because human beings have a highly selective bullshit filter. They recognize nonsense such as insincerity, individual agendas, and subterfuge very quickly on the part of a leader. You must love them to lead them. If they detect that that is not the case, the leadership doesn’t work.

Place in the world you most like to visit: I’ve been around the world many times, and have a passion for the South Pacific. I have crawled a lot of the battlefields over there; it is an interesting and underappreciated part of the world. South America is a place I would like to get to more.

Captain Dye is a lifelong leader and learner: I’m a work in progress. I’m 60 years old and I’ve led almost all of my life since the time I became a corporal. I’ve never lost view of its importance and have a feel for leadership's reward in and of itself.  I’m still studying leadership and trying to improve it and understand it more thoroughly.

War (I love this book by Gwynne Dyer.)

On Becoming a Leader (This book by Warren Bennis is good.)

On War (Some of this by General Carl Von Clausewitz is an interesting treatise on leadership.)

The Prince (by Niccolo Machiavelli)

Great Captains: The Art of War in the Campaigns of Alexander, Hannibal, Caesar,

Until the Last Trumpet Sounds :

The Life of General of the Armies John J. Pershing (by Gene Smith)

A Soldier's Story (by Omar Bradley)

material by John Keegan (It is all good stuff.)

Advice to aspiring leaders: Be selfless; understand that it is not about you. There are some things worth fighting for and dying for. The sun does not rise or set on your ass; if you aspire to lead, you need to recognize that and focus on that. You need to learn how to lead: brilliant leaders aren’t born. Yes, they are born with certain qualities, but to be a leader they need to be honed, molded, refined, and shaped. I like to rely on the leadership traits that I learned as young corporal in Marine Corps: judgment, enthusiasm, dependability, decisiveness, justice, bearing, unselfishness, courage, knowledge, loyalty, endurance, tact, truthfulness, initiative, and integrity. You have to ask yourself: do I bear in mind what they are? Do I demonstrate these things? Do I know what they mean?  I continue to examine these traits.

What and where are the best training programs for leaders? Military: no question in my mind. Everything else leads to management; that word (management) is an anathema to me. I can’t stand it! Good management is always good leadership; good leadership is rarely good management. It's about people. To be a good leader, the focus needs to be on people, not product. Product will take care of itself, but often civilians focus on the product rather than the people.

Compare and contrast military leadership with civilian. Civilians think leadership is management. And they are wrong. The biggest breakdown in civilian life is a lack of personal influence. Influence directed at people--not product--is what you need. Organizations now have a tendency to hire personnel specialists: that is a failure.  Personnel needs to be handled by the leader; otherwise, you get dead end jobs and bureaucracy.  People move vertically only, rather than horizontally like they should.

Where to Go for More About Captain Dale Dye